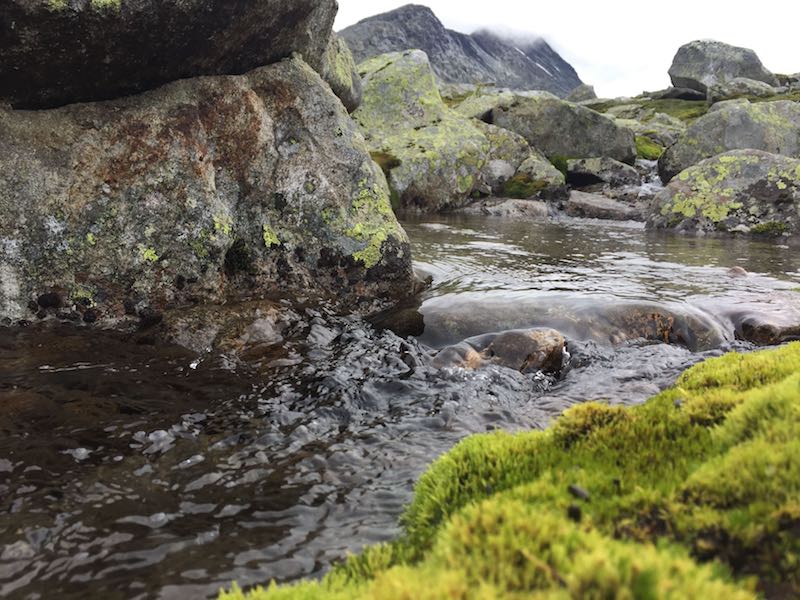 I could hear it much before I saw it. This roaring sound suddenly broke the silence present in the forest of small birch trees I was crossing. I was walking for several hours and did almost not notice that the only sounds surrounding me were those of my own steps and breaths.

The roaring water broke the silence and woke me up from the “continuous movement” trance I was in. The path zigzagged down the hill. As the background noise became increasingly intense my curiosity to see the river grew.

As I arrived at the riverbed I discovered that the roar came from a gentle stream. I removed my heavy backpack and laid it on the round stones along the river. The stones were brown, almost bronze, colored by the iron minerals released from the rocks.

I kneeled down, formed a cup with my hands and drank water. It was clear and fresh. I felt regenerated. Then I filled up my water bottle and sat on the stones. I watched the geometrical shapes of the small waves moving on the water surface.

At once this thought appeared in my mind and did not leave me anymore. In that moment I felt as if an old truth – something I knew since always but had forgotten – managed to emerge back to my consciousness. I drink the water from the river. My physical body is made of about 65% of water. When I sweat the water evaporates and at some point becomes a raindrop feeding the water flow of the river. When I pee in the bushes I give back the water to the soil where it will flow downstream back to the river.

It was so evident that I’m part of the water cycle. My body is a container in which the water transits. The river is a physical structure in which as well the water is transiting. We are both filled with the same water.

I knew that the river was influencing the water. The water had a great taste, was transparent and naturally cleaned. Every drop flew with agility along the river for kilometers, while contributed to creating the unique roar of each stretch – a music I was enchanted by.

I was hiking in several Norwegian natural parks since a few weeks and every day, several times per day, I kneeled down by a river to take water. I watched how the water of ice blocs dripped and formed streams, walked along rivers that became lakes, jumped from one stone to the next to cross rivers filled up with rainwater, stopped hiking astonished by majestic waterfalls.

I felt that the water from these wild rivers had somehow a “high energy level”. But who knows if by transiting through my body I was as well influencing the water? Probably yes, but facing the beauty surrounding me I struggled to imagine in which way I did influence it. When I was trekking in Norway I had a beautifully simple relationship to water. I saw where the water I was drinking came from and I had to make the effort of carrying the weight of the water I needed to drink, cook and clean.

But usually, at home, we see only snapshots of the water cycle: the water comes out of the tap and flows down the drain; we buy it in plastic bottles at the supermarket; it rains and disappears in the canalization. As a result, we need to learn at school, in books or online that it actually is a cycle, but rarely witness or feel it.

Mostly we are not aware of how much energy was used to bring clean water to us when we open the tap. Imagine if you would have to carry buckets of water from a fountain up to your flat. Just during one evening, I would have to take many time the 4 floors stair journey to get all the water I need to cook dinner, wash the dishes, brush my teeth, flush the toilet and take a shower. It would be quite some exercising!

When I was camping in Norway I could use 6 Liters of water during one day for everything I needed: drinking, cooking, washing the dishes and my self (in a basic way 😉 ). At home 1 toilet flush can use up to 12 Liters! Wow.

How could we keep the awareness that we are strongly related to the water system back home even if we live in cities and have a busy life? How can we remind ourselves how valuable the water coming out of the tap is? How can we learn more about where does the water come from and in how many ways are we linked to it even if we cannot see it directly?

Here a few links to learn more about the water system and our water consumption. Let me know if you have further suggestions. Exercise: Dance in the rain

This exercise may help to (re-)establish your relationship with the natural water cycle even when being in the city.

Try it out and let me know how did you feel! 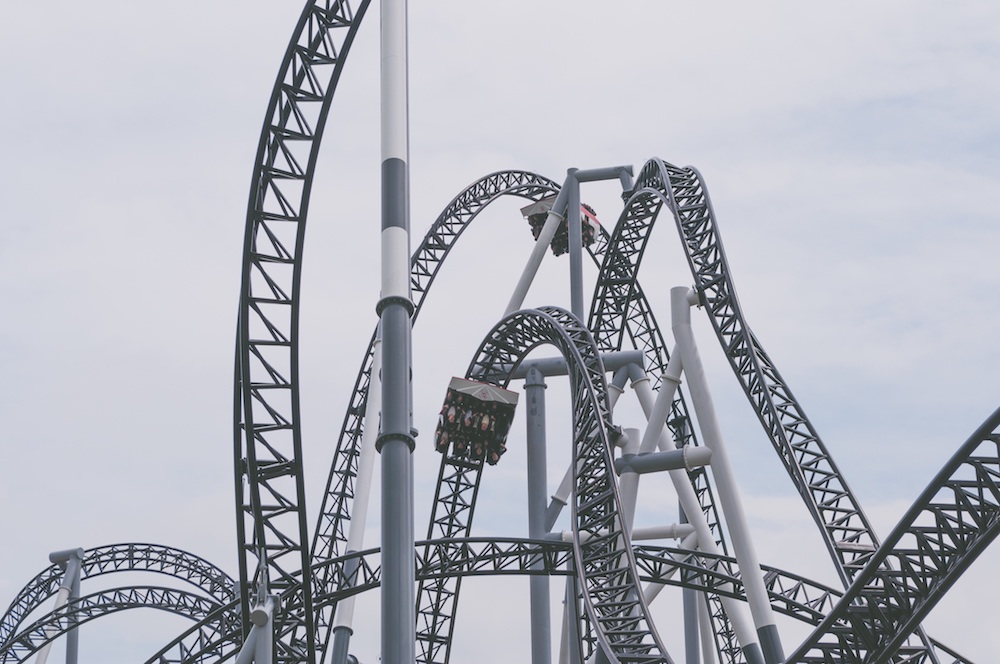 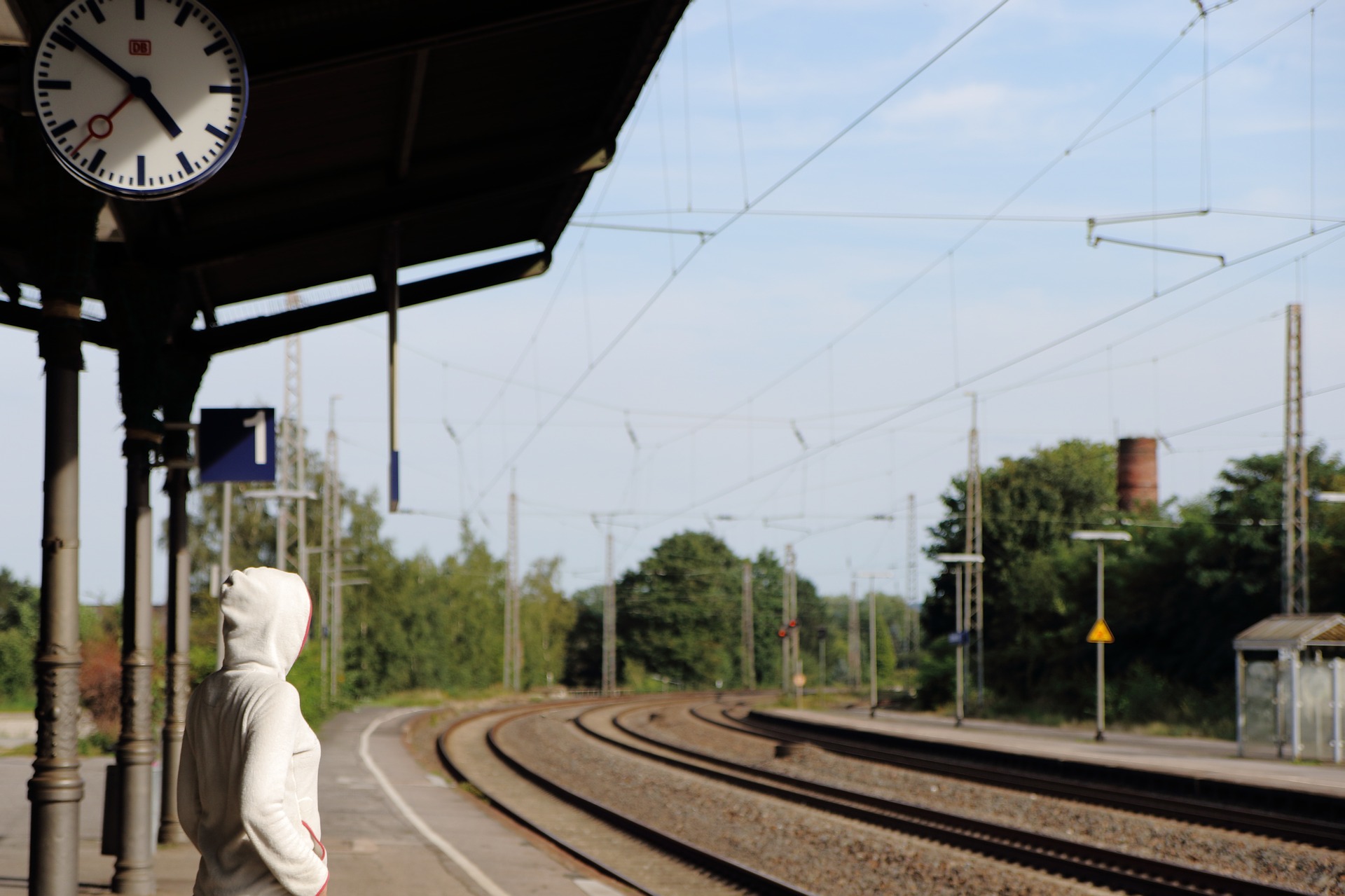 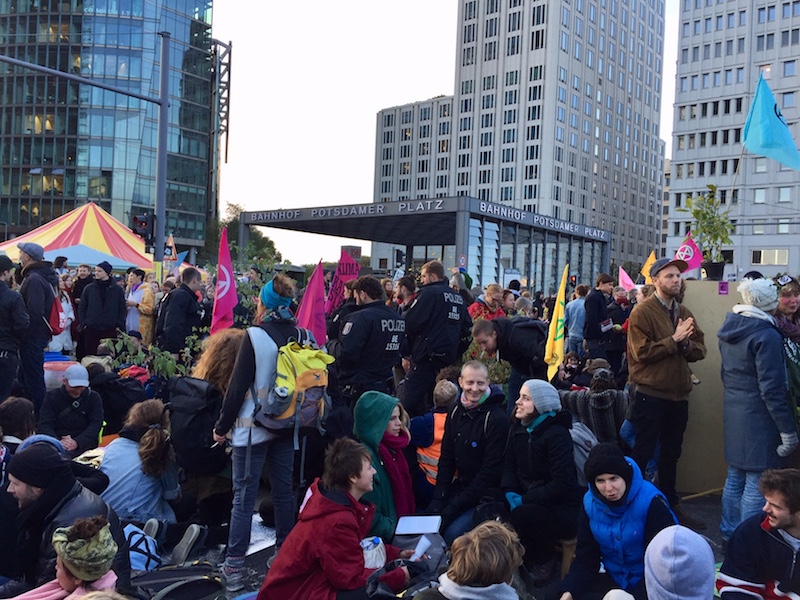